Bakpak Architects together with the DAGOpen office received the Special Jury Prize at the International Competition for the annex of the Helsinki National Museum, a competition to which 180 architectural studies from around the world were presented.

The proposal for the extension of the national museum is based on the initial idea of converting the new building into a new portion of the garden. An object that behaves as an extension of the public space and under which are the accesses to the new annex and the restaurant.

The proposal is positioned in a middle term between the castle and the administrative building to the north of the limit of the plot. Itsspecific position and high compactness allows the project to be developed in the minimum subterranean area and with the least possible impact on the set of existing trees. 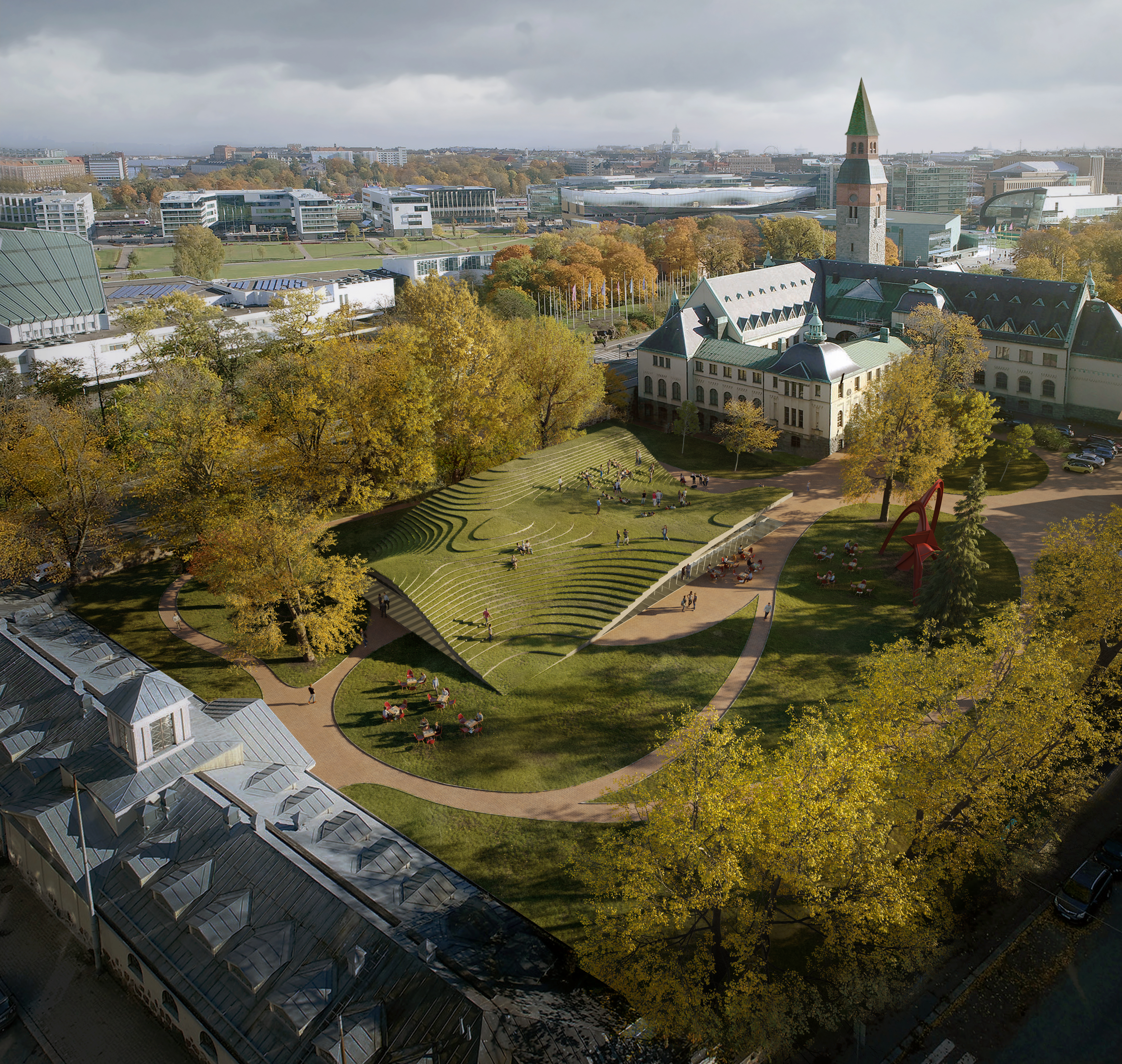 The project is mainly divided into two parts. From one hand, the underground part that serves the main program of the expansion; the new exhibition halls, workshops, technical services, security and maintenance. On the other hand, the emerging part of the building that houses the accesses to the restaurant and to the extension of the national museum.

The underground part, as we have said, is as compact as possible and is divided into two levels. An intermediate level between the level of the garden and the level of the exhibition rooms where we find workshops and auxiliary services, and a main level seven meters below the level of the garden that has a large hall that gives access to the three large exhibition rooms. These rooms are interconnected in such a way that they can function separately or join together in a single large space together with the hall. On this level there are also all the ancillary services of bathrooms and museum shop. There is a perimeter service corridor around all exhibition halls in direct connection with the loading elevator and with the maintenance and storage areas. 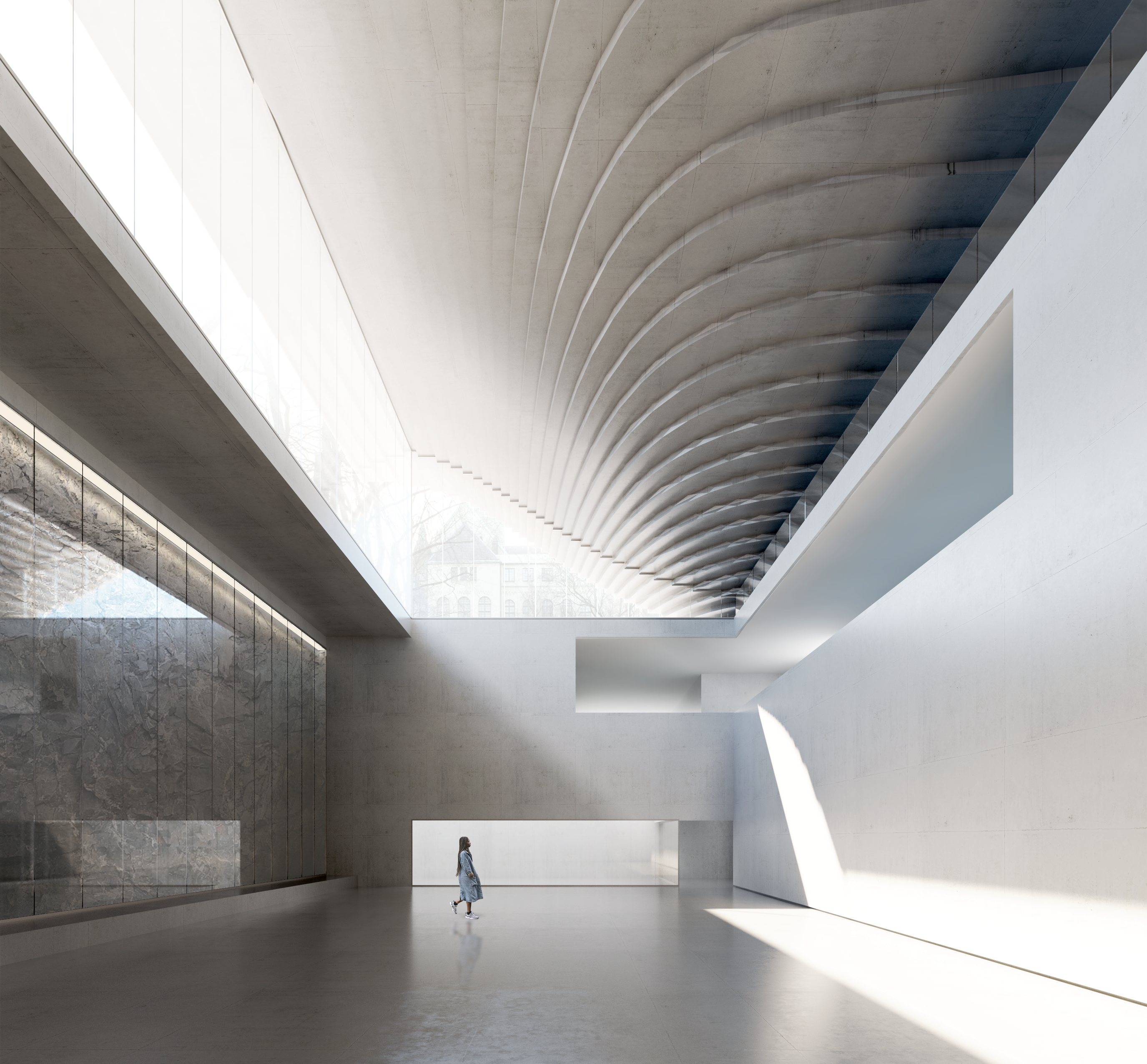 We understand that in the future the garden should be another space where to exhibit and do activities related to the museum. That is why our building is designed as an artefact in continuity with the garden and which, thanks to its shape, provides it with new cultural and exhibition possibilities. The building is presented as a green roof that folds connecting with the garden and generating accesses to the underground annex and the restaurant and propitiating, thanks to its shape, the appearance of bleachers and access areas to the roof itself. This topographical surface is part of the garden and is a point from which to contemplate the castle and the rest of the museum complex. Its topography is also modelled propitiating the appearance of a large outdoor amphitheatre with the castle as a backdrop and which will be an ideal place for exhibition events, concerts and performances.

The new extension can be accessed from outside or from the current museum. Access from the museum is via the north courtyard, which will be refurbished and covered with a steel and glass structure. From this courtyard we access the stairs or lifts that connect with the intermediate level of the annex that is accessed through a large corridor. Once we have travelled through it, we can go down one more level and access the exhibition halls or go up one level and access the restaurant or the garden. In this way the excavation under the castle is minimal and the impact on the functioning of the current museum is close to zero.

Since the annex and the restaurant can operate independently of the current museum, we created a direct access to the annex from Mannerheimintie Avenue through an opening in the existing wall. This access will be open when the restaurant or annexe schedule requires it.

More information about this project in this link.